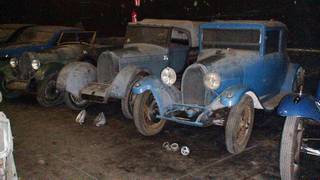 16 Mai 2008, in the evening, died Madame Arlette Schlumpf –Naas; the widow of Mr. Fritz Schlumpf at the age of 76 years. This brave woman had her great years beside her husband till 1977 and in the years after that she fought with her husband against the injustice that has been done to them by the French government, the French court of justice, the Trade Union, the press and the misled public opinion. It was an intrigue against them of jealousy, injustice, instigating people and the bankrupt of the factories of Schlumpf in 1977 came for the politic and the socialists as a gift from heaven to prove that the capitalists were to blame for the bad economic situation. They forgot to mention, that the problems in the textile industry were caused by the much cheaper textile out of Asia. All over Europe textile factories had to close.

What after that happened to the Schlumpfs was scandalous. It’s my opinion, that the French government, the French court, the city of Mulhouse, the writing press of that time and the trade union are due to a serious apologize to Arlette and Fritz Schlumpf. In 1977 and the roaring years after that many private properties of the Schlumpfs were taken away from them. Among them the entire car collection. 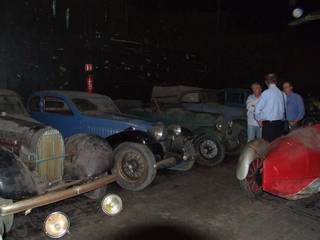 At the 18th of April 1992 Fritz Schlumpf died disappointed at the age of 86. Arlette kept fighting for the rehabilitation of her husband and her daughter. In 1999 she got back as a gesture of the French government a very small part of the entire car collection of Fritz, the so called Malmerspach collection; 62 cars that were not restored yet in 1977 when the French government confiscated them. As Arlette regained these 62 cars – among them 17 Bugattis – they were in a bad shape. Many parts of the cars were stolen, even a complete car: the Alfa Romeo Cabriolet décapotable. Arlette sheltered the cars in a big shed in Wertolsheim and they stayed there until six weeks after she died. Before her dead she spoke to two automotive salesmen; the Dutchman Jaap Braam Ruben and the Frenchman Bruno Vendiesse. They could buy the cars if they promised that the best part of the collection would stay together. Jaap and Bruno kept word. Five weeks after the dead of Mrs. Schlumpf they removed the cars from Wertolsheim to a little village in the neighbourhood of Lille. From 12 Bugattis are waiting to be shipped to the US. One will be restored in Peable Beach condition, the others will be shown in the museum of Peter Mullin in Oxnard in California.

On Monday the 28th of July I was allowed by Jaap en Bruno to see the collection together with my son. It was a kind of emotional to me to see this collection. Arlette fought as a lion to get these cars back. There were even eight Bugattis that Fritz Schlumpf bought from William Shakespeare in 1964. These cars – except some T57 Gallibier - will return to America after 44 years. 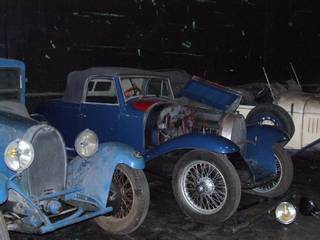 Most of the cars were still in a pretty good shape, although there was nothing done with them since 1964 if you don’t mention the thieves in the 22 years the French government guarded them. At first I walked around between the cars, overwhelmed by the mystic. I considered the history of these cars as a symbol of the brave fight of one little woman against the state. It had not been because of these cars, but it was about the rehabilitation of her husband Fritz. I felt deep respect for Arlette. Then I was struck by the mystic and the charisma of these unrestored cars. Real beauty lasts for ever in what state cars are. It’s in the character. So this collection is one big monument for Fritz Schlumpf but surely for Arlette, too.

I am very happy, that we saw the cars unrestored before their shipping to America. In this condition the cars were during the time, that Arlette fought for them. Arlette is no more, but the story of the Schlumpfs hasn’t ended yet. We will write a book about the affaire, tell the truth, demask the intrigues and lies and rehabilitate Hans an Fritz Schlumpf. But for all we will give the respect to that woman who earns that. Arlette Schlumpf. The battle has begun. 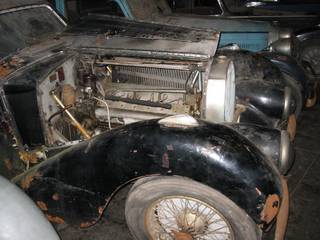 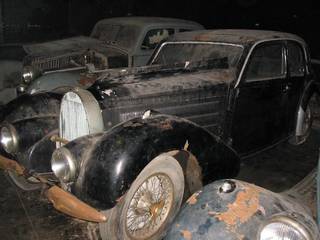 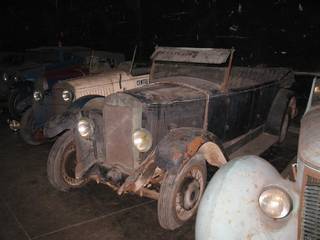 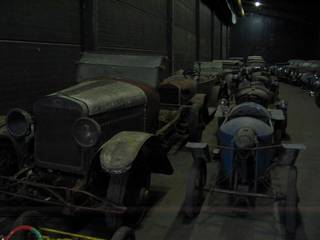 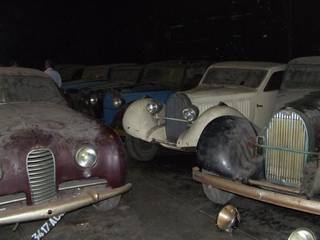 Future of this collection: Some of the Galibiers will be sold in Europe. Braam-Ruben and Vendiesse will each keep a Stelvio. All other Bugattis will go, together with several other interesting cars to the museum of Peter Mullin in Oxnard, California.
The cars will be exhibited there UNRESTORED! The vehicles will be displayed exactly as they were. At the moment only the Delage D8 and the Peugeot will undergo a restoration.

Cars in the collection, The numbers are from the 1977 police report:

For more information: www.extraordinarycarcollections.com Back to the Bugatti revue