Transport of the Shakespeare collection to France.

Two articles about one of the most famous transactions in the Bugatti world! Interesting to know that the cars were transported on a Dutch ship to France!

Provided by Jonas Sandell and others

Sportsman John W. Shakespeare of Centralia, Ill., turned to Southern Railway for help when he decided to sell his collection of 30 Bugatti automobiles ( the largest collection in the United States) to M. Fritz Schlumpf, an industrialist of Malmerspach, France.

His decision to sell created quite a stir among sports car fans in general and members of the Bugatti Owners Club in particular. And it set typical Southern Railway customer service in motion. The end result was enthusiasm and excitement among onlookers and passers-by all along Southern's line between St. Louis and New Orleans. For, in a movement that was as unique as some of the classic models which made up the 30-car shipment, Southern carried the Bugatti collection on the first leg of its journey home, aboard bi-level auto rack cars that had not even been dreamed of at the time the Bugatti's were built. Mr. Shakespeare had his collection housed in a garage in Hoffman, Ill., which is about 40 miles east of St. Louis. His initial problem, once the sale agreement had been reached, was to find the best possible dependable and safe means for shipping his collection to France. He sought Southern's help and got quick action.

W. I. Cunningham, a Southern commercial agent in St. Louis, and O. V. Otwell, assistant superintendent of transportation services, met with Mr. Shakespeare in Hoffman several months before the actual loading date and discussed details of the shipment with him.

While Cunningham outlined the route the cars would take, Otwell measured the height and length of each car and recorded the weight of each, the latter information being supplied by THE BUGATTI BOOK, a compilation of facts and figures published a few years ago by the Bugatti Owners Club. Using these figures, Otwell planned the loading order for the cars on three bi-level auto rack cars. This demanded careful computation, since the Bugattis included many styles from a 7 foot electric carriage to the huge and very rare 18 foot 11 inch Royale limousine, and the cars varied greatly in weights and sizes. On March 30, with Southern's representatives on hand to make sure loading of the unusual and valuable shipment proceeded according to plan, the 30 Bugattis were carefully winched aboard the bi-level auto rack cars. Loading began at 8:30 in the morning. It was 7 p.m. before the last of the tie-down chains were snubbed and securely fastened. The cars stayed safely anchored through their high-speed train journey to New Orleans. According to Mr. Shakespeare, a partner of the Shakespeare Oil Company of Salem, Ill., the cars range in value from $2,000 to $15,000 - except for the Royale, which sold for around $30,000 in 1927. The cars were unloaded and hauled from Oliver Yards in New Orleans to dockside on flatbed trucks by the drayage firm of Dennis Sheen Co. They were then loaded aboard the Dutch freighter Grotedyk by Texas Transport and Terminal Company stevedores. The Grotedyk left New Orleans bound for Le Havre, France, on April 4 -just five and a half days from the time the first Bugatti was winched aboard the rail cars in Hoffman.

Once again the Southern had proved that it can handle any transportation job and handle it well.

During the 1920's and 1930's Bugatti automobiles reigned supreme on the road racing courses of England and the Continent. In 1925 and 1926, for example, Bugatti drivers saw the checkered flag of victory no less than 1,045 times.

Referred to as "The Magnificent Bugs" by all who were familiar with and thrilled by their unique design, engineering and performance, these cars have enjoyed nearly 50 years of adoration from died-in-the-wool automobile enthusiasts. Of some 9,500 that were built, only about 700 are still in existence, yet few makes of cars can boast the dedicated following that Bugattis still have to this day. Ettore Bugatti, a native of Italy who spent his life in France, was the artistic genius who designed these marvels of track and road. He died in 1947. It is said of his cars that there never was a bad Bugatti, and of the more than 70 separate designs that came off his drawing boards, not one was uninteresting. "Le Patron" as Bugatti liked to be called, established his spotlessly clean factory and estate at Molsheim in the Alsace district of France, running both in the baronial style of an earlier age while he designed cars that were ahead of their time. In his book THE KINGS OF THE ROAD, Ken Purdy, dean of American writers in the automotive field, introduces the reader to a Bugatti with typical enthusiasm: "The sound of a 35C being fired up is a mad symphony . . . It is not a simple sound to describe. No hollow, motorboat burble marks the cranking of a Bug. The ear can pick out three distinct themes: first, the sharp crack of the exhaust, a high-level tipping sound; second, the characteristic rattling, bucket-of-bolts noise of the roller - and ball-bearing engine. Third, there is the sirenlike rising and falling scream of the supercharger. Ah, joy! For this the owner has drained the crankcase, heated the oil like baby's formula and poured it back again. For this, distilled water has been brought to 70. C. and decanted lovingly into the radiator. For this many an hour of greasy labor has been given. A bit of warming- up at 800 revolutions per minute, the gear lever bites into first and we go - gently with the gas, lest the car fling itself across the road." Purdy reports that one "advanced" Bugattiste made a 10-minute recording of this sound. Said this devoted fan: "Let this be the last thing I hear before I die." Below the complete list of Bugattis that went from the Shakespeare collection to Schlumpf in France. 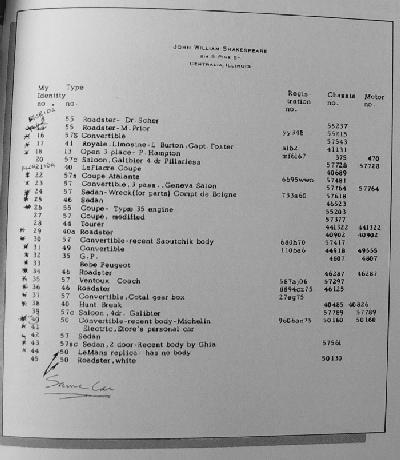 The article below (Click on an image for an enlargement) was published in Motor Trend in 1964.

Not all captions are right, the image of the engine on the second page definitely is no T40 engine!