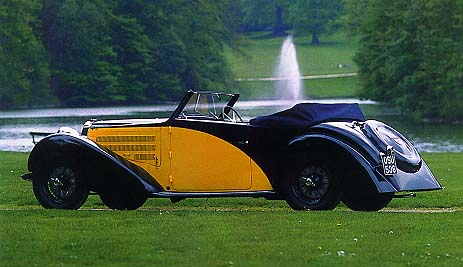 A visit to the bohemians of car-building

Written by: Curt Borgenstam in 1950
Translated by Owe Persson

Earlier this year Curt Borgenstam passed away just after he had celebrated his 80th birthday. He was a great Bugatti-enthusiast, internationally known, and as a qualified naval-architect and marine-engineer was able to judge the cars from Molsheim with a combined aesthetical and technical eye.

Curt also was a founder-member of "Automobilhistoriska Klubben" i. e. the Autohistorical Club of Sweden.

I myself had the pleasure of motoring with him once, in his Type 57 in the early 60´s and this, I can tell you was an experience never to be forgotten, to go in this thouroughbred at top speed and with a driver capable to handle it.

I have taken the liberty of translating an article, he wrote in 1950 and which was originally published in "Svensk Motortidning", the official magazine of the Royal Swedish Automobile Club.

"A visit to the bohemians of car-building"

On the way westwards from Strassbourg after a few miles one finds the little town of Molsheim, which at first look, seems similar to most small French towns with old noble houses, a church in old-perpendicular style, a townhall with a madonna-statue on the facade and cobble-stone square in front of it. There are no more than circa 3000 inhabitants, who mostly are engaged in making tasteful Alsatian-wine but also in some cases are well acquainted to the technic of automobiles.

In this insignificant and peaceful little town you nameley also find the Bugatti-factory, one of the worlds most original and to its layout, remarkable car-factories, where specially during the 20´s and 30´s all believing enthusiasts paid their pilgrimage.

It was in the year 1909, as the Italian artist and motor-pioneer Ettore Bugatti together with some of his close friends chose Molsheim to be the place, where he wanted to build motor-cars according to his own mind, driven by an intractable stubbornes and a certain eccentricity.

Under the direction of this eminent personality a factory grew, organised as a large family, whose members put a honour in realizing the great master´s ideas, sometime bizzare but allways interesting.

The quietness esential for work has unfortunately been disturbed twice by two wars, during which Ettore Bugatti has seen his works in other peoples hands and largerly devastated. During the occupation in the last war the factory was in German command when it was used for the German aramament-industry. The name was changed to "Trippelwerke" named after the manager. After the war it at first became state-owned and subsequently sabotaged by the French communists, who could not resist the pleasure of lifting the roofs with a couple of wellplaced bombs. Ettore Bugatti anyhow succeeded in regaining his old property, but only was able to enjoy it for two years. He died in 1947, mourned and missed by a faithful workforce and also by countless enthusiasts all around the world.

At my latest visit therefore the beautiful family residence was not occupied. It was built as a substantial farm with poultryhouse, pigsty and an unusally big and elegant horse-stable. Here were noble racing-horses brought up, which on the plains at the foot of the Vosges, found good pasturage, big widths and a quiet childhood, disturbed only somtime by the noise from a supercharged motorised stablemate.

Close to the farm one finds the workshops, the subject of le Patron´s foremost hobby. Already at the entrance an example of that aesthetic, which always has surrounded the activity of Bugatti. The porters´lodge is given the shape of a Greek temple, which collonade didn´t satisfy Mr Trippels demand of shotproofness, so he had it masoned together.

The workshop is relatively small, but gives an impression of a special elegance and genuineness. All doors to the different departments are made of carved oak with polished brass-fittings and patent locks.

The workshop-equipment also keeps a very high standard and it seems that one has developed a pronounced ability to use them in several different ways. Some of the machinery are "home-made", perhaps an expression of Bugatti´s certain independence. When for example the electricity-board at the end of the 20´s threatened to rise the charges, Bugatti installed his own generator with a Swedish STAL-turbine and soon he could produce power for his own and even Molsheim´s needs.

At the moment the French state-railways is the largest client. The production comprises mostly of fast rail-cars, which have achieved a top-speed of 195 km/h, which at the time was world-record for rail-bound vehicles. These cars are driven by a petrol-engine, that was formerly intended for a large automobile, the "type Royale" . The first produced was for "le Patron"`s own use, and its coming into existence seems to have been dictated by the desire to own and create something bigger, smaller or in any case different from others. In this case it certainly became larger.

The "Golden Bugatti" is close to two metres longer than the largest Rolls-Royce. Its engine is a straight eight with a swept volume of no less than twelve litres. Its threehundred b.h.p. ought to have given the car a top-speed of substantially over 200 km/h.

As a contrast to the "Golden Bugatti" one can mention the "Baby-Bugatti", a toy-car made as a particularly true scale-model of the firms most famous racing-car, yet without the eight-cylinder suprcharged engine which has been replaced by en electric motor and a battery in favour of security, economy and maintenance. The little Baby-car was made in small series and was popular among young princes and other well-off youngsters.

A quite large number of different models have during the years left the Bugatti-works. A few caracteristical features can be worth mentioning, specially as details and designs to a large degree have been preserved from model to model, which gives the impression that they were built up from the same "Meccano-kit". The chassis-frame is made from stamped sheetmetal in lying U- section with a tall and narrow shape. In the front they are reinforced by the engine´s strong crank-case, which is firmly bolted to the front-members of the chassis.

The suspension has at the front-end semi-elliptic springs, where the front-halves are very rigid and therefore also act as roll-stabilizers. The springs pass through the front-axle, which is forged as a tube in the middle and massive in the outer ends, a masterpiece of manufacturing that we even find on the little "Baby-Bugatti". The rear suspension consists of quarter-elliptic springs and peculiar enough pointing forward.

Already early Bugatti introduced on his racing-cars, a most caracteristical and strange wheel-design of cast light-alloy with a few wide and flat spokes integrating the brakedrum. Later versions of his wheel-designs even had inclined cooling-fins on the integrated brakedrum. On most of the standard-production cars ordinary Rudge-wheels with wire-spokes are used which also was the case for the older racing-cars.

The Bugatti-engine has always 4-, 8- or 16 cylinders with one or two overhead camshafts. The cylinderblock and cylinderhead are cast in one piece of cast iron and bolted to a rigid crankcase of light-alloy, which on most of the models acts as a member of the chassis-frame, which was common practice in the early days. 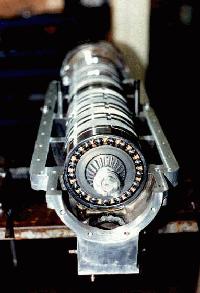 The crankshaft is on most of the racing-engines carried on roller-bearings and built up with closefitting cotterpins.Such a crankshaft with its bearings is a very delicate piece to rebuild for others than the factory but on the other hand it sustains great loads with little friction-losses.

Valves and camshafts are in some degree conventional, but as a peculiarity I will mention, that some older engines have oil-cooled exhaust-valves with drilled channels. Obviously this method was chosen at a stage when more heat-resistant steels weren´t available.

To Ettore Bugatti´s negative side one has to note his uninterest of making his cars silent. A Bugatti is on the contrary full of various unique noises and roaring louds, which for the uninitiated indicates a caution of expensive repair-bills, but to the Bugatti-lover´s ear makes the most beautiful music where no tune is to be lost in the orchestra.

This orchestra is dominated by the transmission-noise. The gearbox is rather primtive with its straight-cut gears, which moves on the axles and a gate lever. This gearbox together with a multi-disc wet clutch, which even in disengaged position drags a lot, makes the intercourse with the four gears a good sport, which the generation growing up will forget in their beautiful world of "fluid-drives", hydraglides" and "oleomatics".

Only the latest pre-war model, the type 57 has in its later versions such novelties as syncronmesh on all gears and bevelcut gears in constant mesh in combination with a dry singleplate clutch. On the whole has this model more in common with the contemporary other makes than the older models. For example is the gearbox mounted in unit with the engine and also later versions even had hydraulic brakes. The type 57 is probably to a great part the work of the son, Jean Bugatti. He combined the fathers genius with profound knowledge of other leading car-makers. Unfortunately he was abruptly carried off by death at the bloom of his age when testing a racing-sports car, which seems to be the irony of destiny as his father never allowed him to compete according to the risks.

His testament, the well-constructed type 57, anyhow had the prospect to be Bugatti´s most popular model and has been built in a rather large number. One example during some time was here in Sweden and participated in the Rommehed -run in 1947. It has a 3.3 litre straight eight cylinder engine, inclined valves and two overhead camshafts. The engine is to be found with and without supercharger. The supercharged version is capable of a top-speed in excess of 200 km/h and held for some time the title as the fastest sports-car in the world before this title was taken with a slight margin recently by a British Jaguar XK 120 15 years later.

The type 57 will certainly be the startingpoint for that post-war model which is planned. At my visit different experiments were in progress with the type 57.

Translated to English in 1999 by Owe Persson.